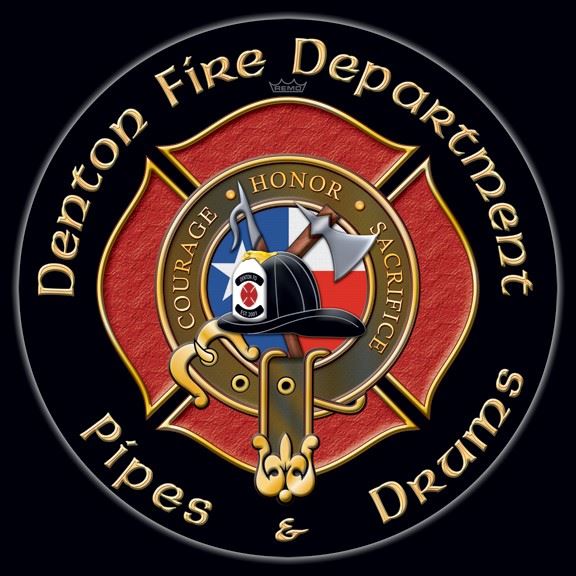 Pipes and Drums have had a long history in the fire service. In the early days firefighting was dirty and dangerous work that often ended in tragedy. The ranks were often filled by Irish immigrants who struggled to find work. When a firefighter was killed in the line of duty they were laid to rest with the sound of the pipes.

In late 2000 the need was recognized for the Denton Fire Department to organize its own Honor Guard to present the colors and show honors at Fire Department ceremonies and funerals. After a slow beginning, small group of Firefighters began practicing parade movements and learning the Bagpipes and Drums.

In May of 2003, the Denton Fire Department Honor Guard performed its first ceremony which was the Grand Opening of the new Central Fire Station. Then in 2004, we were called on to perform at our first funeral. It was for one of our Firefighters that had been killed in a car crash while off duty.

This highly dedicated group of Firefighters have been performing at fire department ceremonies and funerals ever since. The DFD Honor Guard and Pipes and Drums along with other Fire Department Honor Guards have traveled all over the State of Texas and across the country performing in various ceremonies and Paying Honors to Fallen Firefighters. They have even preformed for many dignitaries including the Governor and two Presidents.

The Pipers and Drummers originally wore the U.S. District tartan, but as availability was scarce we made a change. The band now Proudly wears the Austin tartan in honor of the departments first Fire Chief William J Austin.