Oakwood Cemetery is located at the intersections of E Prairie and Bradshaw streets. Oakwood cemetery was established in 1857, and has been City owned since 1931.

This cemetery was established soon after Denton was settled as the new seat of government for Denton County in 1857. Land for the community burial ground was donated by pioneer settler Hiram Cisco, who had earlier conveyed property for the townsite. The earliest grave is that of a Mrs. Wilson, who died during childbirth while traveling through the area in a covered wagon. Her newborn infant daughter died several days later and was also buried here. Other interments at this site include those of Jesse M. Blount, who helped plat the town of Denton and later served as county treasurer, county judge and state senator; Colonel Thomas Gynn Cosbey Davis, a cousin of Confederate President Jefferson Davis and a friend of U.S. President Abraham Lincoln; and many prominent early leaders of the town and county. Two interesting graves are those of Andrew and George Brown. On a change of venue from Montague county in 1879, they were convicted of murder and hanged in Denton. Their tombstones bear the inscription "Executed". Officially named Oakwood Cemetery in 1931, this burial ground now serves as a historic reminder of the pioneers who first settled here and who led in the development of the area. (1982) 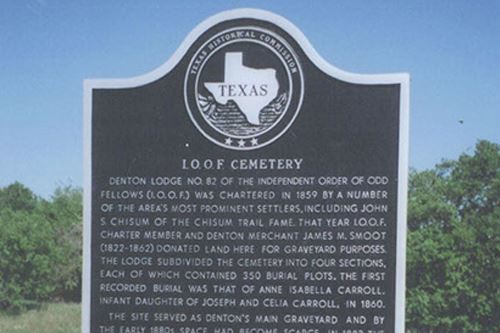 Denton Lodge Number 82 of the Independent Order of Odd Fellows (IOOF) was chartered in 1859 by a number of the area's most prominent settlers, including John S Chisum of the Chisum Trail fame. That year IOOF charter member and Denton merchant James M. Smoot (1822 to 1862) donated land here for graveyard purposes. The lodge subdivided the cemetery into four sections, each of which contained 350 burial plots. The first recorded burial was that of Anne Isabella Carroll, infant daughter of Joseph and Celia Carroll, in 1860. The site served as Denton's main graveyard and by the early 1880s space had become scarce. In 1883 the lodge enlarged the cemetery by 7.5 acres acquired from adjacent landowners John and Ann McMurray; 6.5 acres acquired from the McMurrays in 1916 further enlarged the cemetery. By the early 1920s burial space was again limited, and in 1924 the cemetery was enlarged by four acres. After maintaining the cemetery for more than 60 years the lodge deeded the 22-acre site to the city of Denton in 1933. Among the approximately 5,800 people buried here are pioneer Denton County settlers, local and state elected officials, and veterans of wars ranging from the Texas Revolution to World War II. (1996)