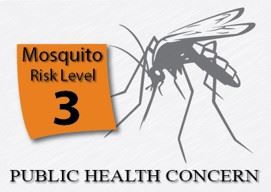 Some mosquitoes carry West Nile Virus (WNV). Mosquitoes only need two tablespoons of water to breed, and water can collect just about anywhere. Each year, the City of Denton implements its Mosquito Surveillance and Response Plan. The main goal of mosquito control is to decrease the number of adult mosquitoes by eliminating breeding grounds wherever possible. Partner with the City to prevent WNV and protect yourself from mosquitoes.

The City is currently at Risk Level 3.

At Risk Level 3, the City will continue to conduct routine surveys of adult mosquitoes, which will be identified to species level and screened for the presence of viruses. The amount of biological agents (Bti) applied to kill mosquito larva will be increased over previous Risk Level amounts. The City will also increase public education emphasizing source reduction, personal protection, and disease symptoms.